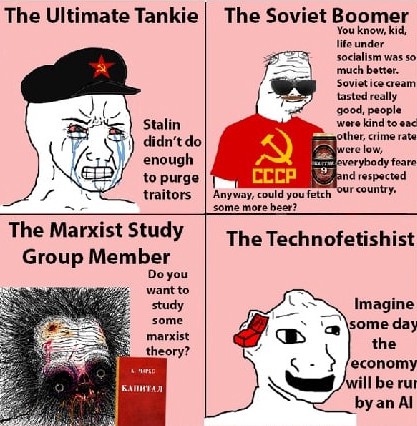 “Shit’s fucked at the moment. You get armchairs writing incomprehensible bullshit about dialectics, larpers fighting “revisionists” and “trotskyists”, red conspiratards claiming all the boomer conspiracies Americans got but in reverse, teenage girls thinking western idpol approach is the way, shit tonne of small grifter parties trying to be alternative to kprf to get those donation crumbs, and like 5 or 6 networks of marxist circles trying to figure out what is to be done with this mess. The ride is only beginning.” -anon

The KPRF (sometimes spelt CPRF in English) is branded as the successor to the original communist party and at its electoral peak was winning around a quarter of the vote in the 90s election. In the 1996 election, KPRF candidate Zyuganov came a close second in what many feel was an dubious election, eventually won by America’s sweetheart, Boris Yeltsin.

These days the KPRF polls around 10–15%. Some critics have declared that it is too establishment and ideologically scattershot. Writing in 2001, Boris Kagarlitsky wrote that within the organisation, “the “left” figures, with their more radical declarations, provided cover for the “pragmatists”, working hand in glove with the Kremlin.”

In 2020 similar criticisms are leveled:

The KPRF… “is structure[d] to contain red opposition. There are so many people in CPRF: left liberals, socdems, socialists, communists and so on. If CPRF will become a true party with freedom of speech it will fall apart immediately because of too big contradictions between its members. But this doesn’t happen due to hard control from Moscow head office.”

This charge seems to fit Katz and Mair’s ‘cartel party’ thesis of modern politics. The idea is that the age of the mass movement party has been replaced by a party which colludes (mostly unconsciously) with the state in order to perpetuate its own survival as an organisation. This results in parties becoming de facto institutions of the state. In recent years this may be challenged (see for example Corbynism in the UK), but is just as liable to be shut down quickly (see Corbynism in the UK).

The Russian Communist Workers’ Party of the Communist Party of the Soviet Union. Formally known as РКРП-РПК /RKRP-RPK, they claimed 50,000 members in 2007 when it was de-registered by the Ministry of Justice. Still active under the leadership of Victor Tyulkin and publishes the newspaper Trudovaja Rossija Official Site here. 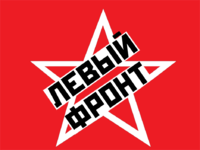 Formed in 2008, Left Front is an anticapitalist and antiimperialist party. in 2012, prominent members Sergei Udaltsov and Leonid Razvozzhayev were convicted and sentenced to 4 years of prison for their involvement in the mass protests against the 2011 election results.

The Russian United Labour Front. An attempt to unite all the leftists in Russia so as to better organise and strategise. Includes the RKRP-CPSU and Left Front. Their position on the KPRF and its members can be seen in the image below. Official site here.

The Russian Wing of the International Marxist Tendency. They do not participate in entryism, but are part of local campaigns, for instance protesting against the building of a church in a public park. They also publish a journal, Enemy of Capital.

There is a flourishing media-sphere of leftist producers on native and global platforms.

This youtube channel makes very high quality socialist propaganda videos using CGI that look amazing. As a bonus, they are also subtitled in English. Bound To Wake Up/Class Dream Of Humanity is a brilliantly accessible description of capitalist hegemony.

This documentary on Stalin aims to cut through the modern hero/villain dichotomy and is critical of how the modern image of Stalin has become detached from the greater class context of the Soviet Union. Even those who see him as a saint sometimes miss the point.

Rabkor.tv
Edited by Boris Kagarlitsky, an academic writer with a dissident pedigree that bridged the soviet and capitalist eras of Russia, Rabkor.tv is an online magazine covering politics, economics, society, and culture. A lecture by Kargarlitsky in English can also be seen here.

“Prime Numbers” produces videos about capitalism and economics with the aim that viewers can ‘arm yourself with arguments for disputes with ideological opponents’.

ВЫХОД ЕСТЬ!- There is an Exit!

‘Video magazine of the future!’

Finally we end with the uncategorised ‘conspiraboomers’

One of our sources noted the persistent presence of what they called the ‘conspiraboomers’. A fraction of the left deeply entrenched in soviet nostalgia and who flirt with Red-brownism and ideas of dremuchee okhranitelstvo (Backwards-looking guardianship). An uncritical nationalism pervades these discourses with some venerating Stalin as a purger of ‘zionists’ and trotskyists or in a sort of Russian version of qanon, Putin is cast as a crypto-communist, secretly building socialism from above. There are even people who believe that Lysenko was right. The influence of the Alexander Prokhanov’s Завтра/Zavtra journal, a project that aims to unite the ‘whites’ and the ‘reds’ (the anti-soviet nationalists and the national communists) is key here.