How can the communists ensure that the everyday movements and immediate demands of the masses begin to accumulate revolutionary forces, even in this period of triumph across the board of the bourgeoisie? This is a central question for Portuguese communists, scalded by the successive infiltrations of reformism, always presented in the name of the best Marxist intentions.

The accumulation of revolutionary forces is practically unknown in Portugal. What we have are many examples of how forces are dissipated: chief among them, of course, is the PCP, faithful to its thorough work with the proletariat, in the firms and the unions, waving the banner of “defense of the achievements”, but leading the masses from defeat to defeat, due to its superstitious respect for parliament and the bourgeois order; then, the “new left” aggregated around the Bloc, flaunting its alternative causes (“broadening citizenship”, “deepening democracy”), which, in practice, only give voice to the discontent of the young petty bourgeoisie, in search of a place under the sun; And there are still many sympathizers of the revolution, disgusted by the prevailing picture of class collaboration, for whom all immediate, partial demands are unworthy of any effort, and so they surrender to ultra-leftist declamatory inaction.

In that case, what is to be done?

Communists, of course, don’t have to invent special struggles. We have to be present in the real struggles, however small and limited they may be in their objectives: against unemployment, precarious work, the constant decline of health conditions, housing, education, the overexploitation and oppression of women; in the movements against the impunity of the capitalists and the corrupt mafia-like wave that is bourgeois politics today; in the protests against imperialist military expeditions and the configuration of the police state…

We know that the revolution is only built from real movements and not from models invented by ourselves. Outside of exceptional situations of revolutionary crisis, the masses throw themselves into the struggle to obtain small improvements within the limits of law and order; only by participating in these struggles can communists help the collectives of workers to experience things for themselves, to become aware of the antagonism between their interests and those of the bourgeoisie, to create patterns of organization, to gain confidence in their own forces.

What then has failed in the past work of the communists? Why did their initial revolutionary intentions dissolve into the practice of daily struggle, until they eventually became reformists? I see at least four causes for this.

First, the choice to concentrate efforts not in the proletarian layers where the burden of antagonism with established society is greatest, but in the semi-proletarian and petty-bourgeois sectors, better educated, with greater organizational routines, among which it is easier to achieve results, but also among which, on the other hand, everything flows in the direction of reformism.

Second, the very deep-seated tradition in our country that work with the proletariat boils down to economic demands and which hands the direction of the political struggle over to the progressive petty bourgeoisie. It is time we understood that the communist mobilization of the proletariat also involves the anti-imperialist struggle, solidarity with immigrants and the fight against chauvinism, the struggle to free working women from their double subjugation, international contacts, anti-capitalist propaganda, etc.

Third, in the use of trade unions, shop units, and various other associations, oftentimes the contradiction between the interests of the bases and the practice of the bureaucratic apparatus, which tends to appease the powers that be and to see radical actions of the masses as a danger, has been forgotten. This is how many communists who went into these organizations with the intention of “serving the people” became hardened reformists.

Fourth, the yielding to the illusion of achieving by means of parliament the visibility and political weight which cannot be achieved by the hard work of direct mass mobilization. Thus it was that, as the offensive of the right wing destroyed the popular achievements of 74–75, the revolutionaries of the time transferred the axis of their activity from support for the most advanced sectors and their organs (strike and occupation committees, workers’ and residents’ committees, agricultural cooperatives, etc.), to the “parliamentary battle.”

Of course, participation in elections may be necessary, but on one condition: to be sure that we will use the bourgeois institutions and not let ourselves be used by them.

In short, communist work among the masses requires much effort and shines little. We must realize that, in a period of stagnation of the class struggle like the one we are going through, the authenticity of communists is measured by their capacity to avoid the temptation to be recognized by the media, to gain the status of a “responsible party”, etc. We should not be impressed by the accusation of “sectarianism” that the reformists throw at us, nor by the impatience of militants who are do not resign to lackluster work and want tangible results in a short time. The defense of the deeper interests of the masses today means a certain degree of isolation, entails misunderstandings, persecutions by the “democratic” powers, etc., but only by persisting on this course can we play our part in a future revolutionary crisis.

The Communist Party, a foreign body in the bourgeois society it aims to overthrow, is under tremendous pressure from the latter to be digested and destroyed: police and military pressure when necessary, but also political and ideological pressure, in everyday legal activity. Pressure that comes not only from the bourgeois power apparatus but also from the petty-bourgeois layers adjacent to the proletariat and from the fluctuations within the proletariat itself, now largely disjointed and demoralized by the defeats it has suffered.

What is at stake, in this current difficult period, is to maintain devotion to the general and long term interests of the class, not allowing ourselves to be caught up in circumstantial victories, paid for by absorption into the system. It is up to us to create in the class advanced bastions around which the resistance of the most rebellious can be fixed. As for the meeting of the Communist Party with the masses of millions, this will only be possible at the moment of revolutionary crisis, when the masses, pushed to the extreme, refuse the bourgeois order and go towards the proposals of the communists. That time may be far off, but it alone should serve as a guide for our action today.

Written some time after the failure of the socialist revolution in Portugal, this article by Portuguese communist Francisco Martins Rodrigues briefly outlines some of the reasons behind the decline of the communist movement in the 1960s and ’70s, and sketches out solutions to these organizational problems.

Having previously been a member of the Central Committee of the PCP, Francisco Martins Rodrigues became a critic and dissident of that very party after becoming dissatisfied with its growing reformist and class-collaborationist tendencies. Over the following decades he would perform work in various other political organizations, always seeking to maintain and uphold a revolutionary communist line. His theoretical developments led him to critique the legacy of Stalinism in the communist movement as well as the revisionist ideologies which suceeded it, always from the standpoint of returning or even rediscovering correct Leninist positions. This would later lead him to write his magnum opus, the Anti-Dimitrov, a critique of the political line adopted by the Third International in its 7th Congress, which marked a turn towards class-collaborationism in global communist strategy and tactics.

In this brief intervention, Rodrigues points out important lessons for communist organization. Far from outdated, the reflections presented in this short piece can still allow us to think beyond the limited framework of communist action in the West, from the prevailing “superstitious respect” for bourgeois-democratic institutions to the general unwillingness to trudge through the swamp, in Lenin’s old metaphor. Despite adverse conditions, this “accross the board triumph by the bourgeoisie”, communists have no other course to follow but that of diving into the proletarian layers of the masses and participating in their real struggles, no matter how unfeasible immediate results might be: “Communists, of course, don’t have to invent special struggles. We have to be present in the real struggles, however small and limited they may be in their objectives”. For it is only by participating in these struggles that we can “help the collectives of workers to […] create patterns of organization, to gain confidence in their own forces.”
-aabm is a communist from Brazil, and occasionally publishes translations and other texts at marxists.xyz 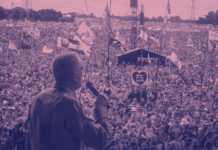 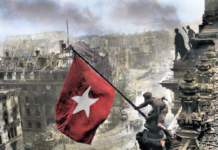