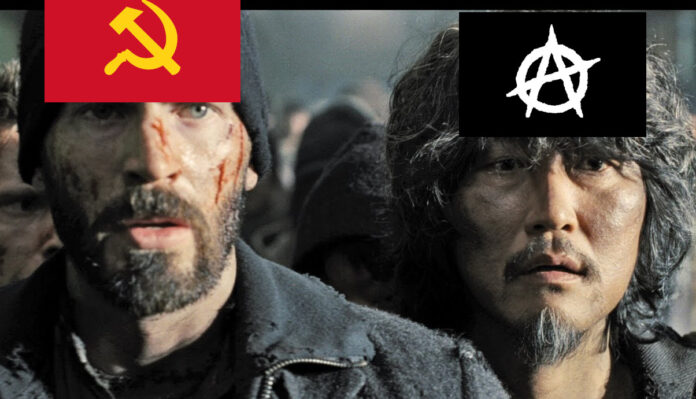 Bong Joon-Ho’s film Snowpiercer (2013) is at first glance high concept sci-fi, yet a deeper look reveals it is a deep allegorical fantasy exploring class hierarchy and the praxis that informs our reaction to it.

The film’s plot of a self powered train whizzing around a frozen post-apocalypse is based on 80s graphic novel Le Transperceneige by Jacques Lob and Jean-Marc Rochette. It’s not often that a film outclasses its source material, but Snowpiercer gives its audience a lot more to chew on. Le Transperceneige, is a gritty world of brute force that owes much of its atmosphere to cold war spy thrillers. Yet for all its brilliant conceit, the ending to the first book, in which Proloff ends up as train driver, is somewhat fatalistic. Snowpiercer builds on the world that Lob and Rochette and while it’s ironically more comic take on the ecosystem won’t be to everyone’s tastes it allows it to explore class hierarchy in depth.

To be clear, the society of the train is not a capitalist one (although we will see below that this does not mean it cannot be a metaphor for capitalism). For starters there is no market, this is a centrally-controlled resource economy. Nevertheless it is clearly a society that has bears the vestigial traces of capitalism as it clearly a class society with one group hoarding most of the wealth while the others who reside in the end of the train, the ‘Tail’ are treated with contempt. The one place where Le Transperceneige is more intriguing than the film is the inclusion of a middle class, complete with concerned NGO types. 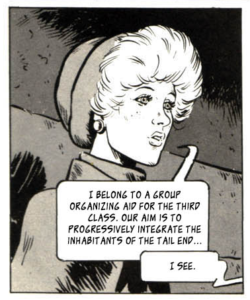 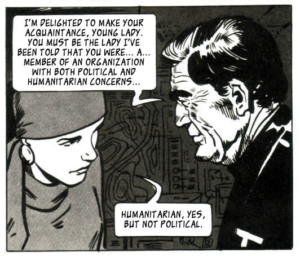 Given that the vast majority of people in the end cars don’t actually produce anything, it raises the question of why they are kept around. Actually, in the comic, one of the major plot points concerns the plot to decouple the end train cars and cast them loose into the frozen wasteland. However the film depicts a more complex relationship. While it’s true that most of the the Tail don’t contribute to the resource economy, tail members are occasionally kidnapped to perform menial work, such as baking the protein bars or even performing as concert violinists.  The climatic moment of the movie is when it is revealed that the two stolen children are being used as slaves in the engine room. Thus the Tail in Snowpiercer function as what Marx called the reserve army of labour, ready to be used and exploited.

Snowpiercer’s society is a complex hegemony. The Tail are primarily kept in line via the brute force of the train’s police/army organisation and the occasional patronising lecture from Tilda Swinton’s Minister Mason. On the other hand, the more privileged classes are indoctrinated in a more friendly way, learning songs of praise in their bright and colourful classrooms. The lower classes are addressed in pseudo-religious terms, for example, making reference to the ‘sacred engine’, while the middle class mantra appear to be more grounded in a rational language “if we leave the train, we die”, yet the veneer of science still masks the greater truth that the train is slowly failing.

There is important message here about the effect of hegemony one that commentators who too often become obsessed with ‘bad culture’ can learn from. Despite Minister Mason’s lectures about ‘knowing one’s place’, not one of the Tail believes it. They sit and listen to her diatribes not because they believe her, but because of the men with guns standing behind her. This isn’t to say that studies of hegemony do not have their place, but to realise that a purely hegemonic analysis disguises the ways in which institutions (or in the case of capitalism, the market) compel people to act whether they want to or not.

So what does the train represent? One theory is that the train represents the State. If so, then the plot of the film is about a gang of revolutionaries fighting to take control. Curtis, played by Chris Evans, represents a Marxist-Leninist faction aiming to seize the state and then radically transform the social divisions of wealth. The fact that the Tail enders had to literally eat babies to survive in the early days was not a product of Malthusian scarcity, but of class division. The problem with this instrumental praxis is the ending of the film. Firstly, we find out that the engine is breaking and that Wilford, the master of the train, has been using small children as replacement parts. Curtis is horrified by this Omelian system and immediately attempts to save the children. We do not know what his plan was after that because immediately following this, his ideological rival Namgoong blows up the train. Curtis’s revolution never materializes. There is no liberation day on the Snowpiercer, no flags are waved, no seizing the means of production. The Bastille has been stormed but tomorrow never comes. For the more orthodox Marxist-Lenist then, the ending of Snowpiercer is quite literally a derailing of the revolutionary project and the final scene, where Yona and Timmy survive the crash and see a polarbear, is a desperate attempt by Hollywood to tack on a sappy ending.

Yet there is an alternative explanation. As we mentioned above, Namgoong does not desire to enter Wilford’s chambers but instead wants to blow open the door of the train. In this theory, the train does not just represent the state, but the inextricable bind of state-capitalism. Namgoong realises that as long as they all stay inside the train, they can never escape the social divisions, no matter who in charge. That the engine requires child labour to keep in running confirms this, showing that exploitation is hardwired into the system. Namgoong is an anarchist, who does not seek the seat of power, but to exit the system. Curtis’s plan to take control of the train is fraught with contradictions. 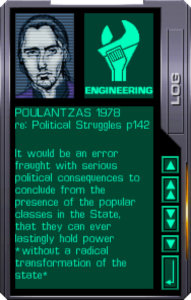 Simply taking the state is never enough to see through a revolution, As Nicos Poulantzas notes, the state itself must be revolutionized at the institutional level. But if our desire is to keep the train/state going, then we cannot substantially alter it, otherwise it would break down completely. Curtis sees the train as something that can be harnessed for the power of good. Namgoong sees the train as the fundamental problem.

To be sure there is a fairly substantial element of recklessness and vanguardism to Namgoong. Earlier in the film he points out to Yona the bodies of those who had tried to escape before but had perished in the cold with a mix of regret and admiration. A free death is preferable to a living slavery for Namgoong, and while we all may agree with the sentiment, how many of us, given the choice would pursue such a strategy? He is willing to crash the train and risk the lives of all aboard to bring down the abusive system. Yet in some respects the film’s ending proves him right. The polarbear at the end signifies not just vague hope, but the proof that life exists outside this train/system that we have been told is not only the best way but the only way.

This is not the sappy Hollywood ending that it has been described. Both Curtis’s and Namgoong’s plans were flawed, perhaps inescapably so. Curtis was so consumed with gaining power that he neglected an examination of what that power was. Liberation, for Curtis was defeating his enemies in order to uplift the masses. By the end it was all too easy for him to assume the crown of leader. For Namgoong though, liberation could never be achieved within the system which was fundamentally flawed. Namgoong had a more perceptive understanding of Snowpiercer’s society, but ultimately his praxis was selfish. He was correct that life could and needed to exist outside of the train, but his explosive method of achieving this made human life secondary to his cause.

It is not often that the American film industry grant us a film that explores left wing and anti capitalist ideas with such clarity and consciousness. Bong Joon-Ho’s Snowpiercer (2013) is one of those rare gems that punctures the shroud of capitalist realism. It also offers a thoughtful critique on both state-based and anarchic means of resistance. A new world is possible, but it comes with struggle and perhaps dialogue between the different factions of anti-capitalists in order to bring about the new world. 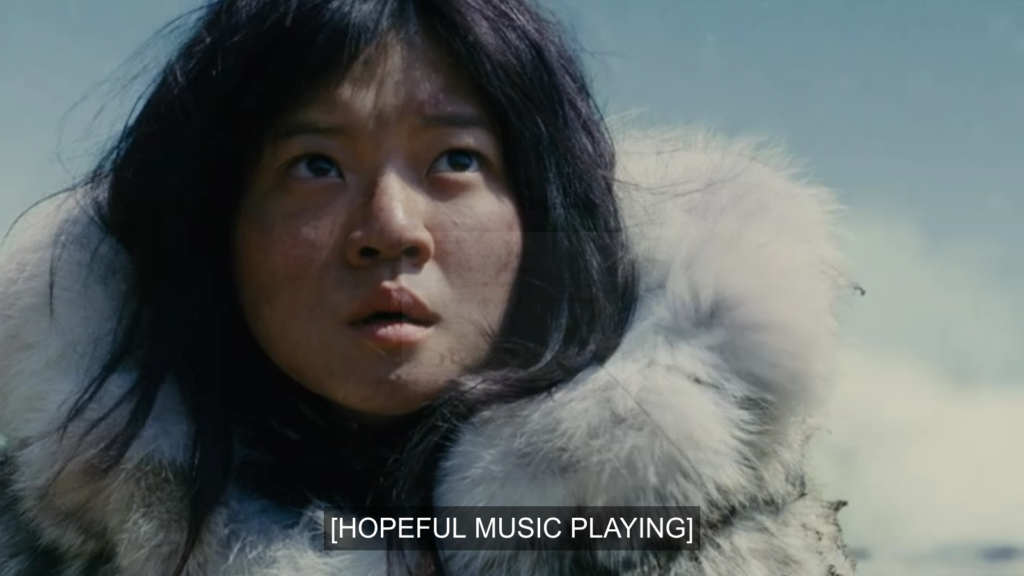 Support New Multitude, our writers and artists on Patreon