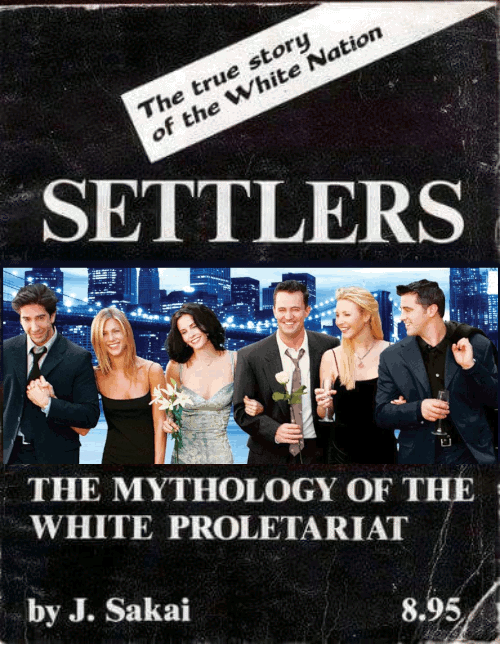 J Sakai’s book Settlers: The Mythology of the White Proletariat, first published in 1983, has become something of a controversy in American left wing circles. It’s proponents see it as a vital history and historiography that offers deep structural reasons as to why America is built not only on class but on race and why class solidarity is elusive. Settlers shows that white proletariat were (and presumably are) a privileged caste of labour and benefited materially from the division.

Yet the book is not without its critics. Many have identified a reactionary milieu associated with the promotion of the book who use it to justify race reductionism and ethno-nationalism. The charge against Settlers is that its normative element promotes division and a kind of racial defeatism that treats the categories as essential and everlasting. Settlers, then may function as a vehicle for radlibs to become full fledged nazbols. 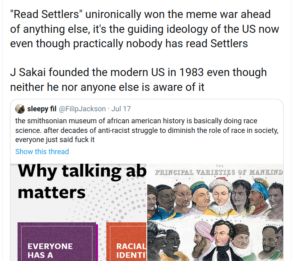 What is needed is a critical reading of Settlers for both it’s historical analysis and whether it’s influence is warranted.

Firstly, this book absolutely obliterates syndicalism and all adjacent marksoc/libsoc/ansyn workerist tendencies. By exposing early trade-union and syndicalist movements for their participation in racist hegemony, Sakai pretty much dispels any sort of nostalgia for orgs like the early IWW and the AFL-CIO. What syndicalists fail to understand is that, so long as the immediate material interests of the workers lie in not upsetting the oppressive status quo that they relatively benefit from, it is almost certain that the unions will choose to defend oppression. The reactionary character of modern unions is already ample proof that basing a tendency solely on the immediate material gains of the workers is ridiculous, but Sakai drives it further by showcasing how American labor unions were unable to fundamentally upset the status quo, let alone bring socialism. Marxist-Leninists already know that there needs to be a Marxist vanguard to guide the proletarian to socialism (and therefore not get diverted by immediate material gain at the expense of achieving socialism), but your average anarkiddie/libsoc doesn’t seem to realize this yet. I actually recommend that Chapter 6 of Settlers be made required reading to all libsocs to immediately drive that nonsense out of their head before they move on to Lenin.

Secondly, the book is first and foremost a materialist history. People like to imagine that Sakai claims to be some great ideologue, and that he espouses some great theory of minority nazbolism. This really isn’t true, thank God. Almost all of the book is pretty standard MLM analysis, from the condemnation of neo-colonialism to the critique of “socialism” that rests on third-world exploitation. Really, if it weren’t for some of Sakai’s more rash statements (which could quite honestly be entirely cut), I imagine that the book would be rather unobjectionable among Maoists.

Finally, the actual history written is very good. Now, I’m not going to claim that Sakai is anywhere near a Zinn or a Parenti. However, for what it is (a very short expose of white labor aiding racial suppression), it overall succeeds. It presents inconvenient truths that hamper the image of white class struggle and shows that white workers were often happy to participate in capitalist exploitation of minorities.

One thing that stands out is the rather outdated and cheesy prose. It was very much a product of its time, but it becomes grating to read. Constant usage of words like “Euro-Amerikan”, “settler”, and sarcastic quotation marks are not only annoying to a modern reader, but undermine its professionalism.

There is a lack of historical relativism. If one were reading this without the perspective of Marxism, one would come to think that the development of capitalism and mercantilism were absolute evil. There isn’t proper accommodation for what were, at the time, progressive movements. For example, Sakai’s history of WWII is pretty off. While it’s certainly true that America had less than noble motives in WWII, to paint the struggle between relatively progressive Keynesian capitalism and full-blown mobilized reaction as some sort of moral equivalence is utterly ridiculous. I hate to sound like some radlib saying “you gotta keep in mind what was normal at the time”, but Sakai regularly forgets that the popular struggles of the past, as genocidal and evil as we may recognize them to be in hindsight, were still important and necessary steps in material development. This is very much his biggest problem, and what deserves the most criticism.

The book also suffers from a lack of geographic scope. While Sakai is very explicit about only wanting to cover American imperialism overriding worker struggle, the very fact that it is by-design unable to cover the vast majority of the population is rather unfortunate. The relatively homogenous countries that have domestic class struggle as well as anti-imperial struggle (aka most of the Earth, and especially the third-world) are left out of the conversation. The only other country that I can see this analysis applying to is Israel, and I doubt anybody would contradict me if I said that “Labor Zionism” is the very epitome of a labor aristocracy. Thus it is important that this be viewed as a short history book and not as any broader piece of theory with the implications that that would bring. While it’s true that American leftist may overly romanticize the workers struggles of the early twentieth century, we should also avoid the counter tendency that would say that because workers in the past were antagonistic along racial lines then there can never be a united working class in the present.

In retrospect to some of the modern reception of the book, Sakai did not go nearly far enough in criticizing racialism. Clearly, according to his later interviews, he is aware that his work has been co-opted by racial separatists to give reactionary thought a Marxist veneer. While it seems like he has tried to fight this in his own time, the entire problem could have been solved with, say, an extra chapter that reiterates the material and class basis of racism and imperialism, and that just because the general white American working-class is complicit in imperialism, that doesn’t mean that race is any sort of substitute for material analysis. Not only would this have given the book a much more materialist whole, but it would have prevented a generation of woke fascists from creating the revisionist doctrine of “Sakaism”, a doctrine that I’m sure Sakai himself would despise.

In summary Settlers is not the super-amazing masterpiece that some paint it as, nor is it the revisionist racialist pseudo-fascism that some perceive it as; it’s just a decent material analysis of the white working class in America, with its fair share of positives and negatives. A praxis relating to the use and abuse of Settlers as needs to stop making the book stand for something more than it is. Is it reactionary? No. Do reactionaries misappropriate it? Yes. We need to separate the book from its worst proponents. While the nazbols are incredibly shitty, we need to distance them not just from the book, but from the left itself. Those who would replace a class analysis with a racial one miss Sakai’s own point that the racial antagonisms in the US are still at their root, explained by materialism. While this book is useful it’s also best not read in isolation but accompanied by other critical texts on both race and class. Reading it in vacuum is not recommended. 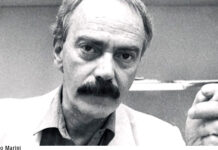 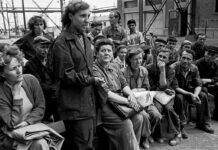 Munkástanácsok in the Midst of the 1956 Revolution

The Dispossessed of Sudan and Global Capitalism

(Edit here)New Multitude is a space that aims to create links between the worldwide non-sectarian left.
Follow us on Twitter and support our writers, editors, translators, and artists on Patreon